Secret ingredient for creativity No. 1 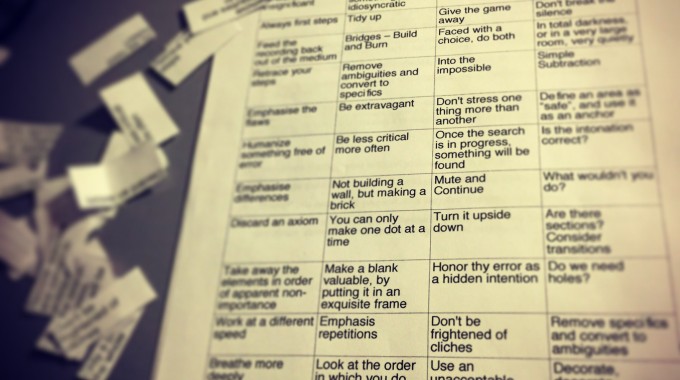 I first came across Brian Eno’s “Oblique Strategies” back in 1999. I was about to go travelling with work and I was gathering together material to keep me from boredom on the plane. At the time I was not a music professional, but I was a musician and I was discovering just how much of a hand Brian had in the recordings I loved.

As a kid I was big into drawing and painting. I loved creating something from nothing.  I found the immediacy of it, the ability to create something from nothing in 10 or 15 minutes, immensely enjoyable and rewarding. It was just fun. Plus, it was a solo venture so I could get stuck in anytime, anywhere. I was my own editor and critic, even if I was way too easy on myself all the time. Creativity came easily as there was no embarrassment involved. If a painting turned out bad I just threw it away without anyone ever seeing it. Having done hundreds of them, some of which I thought were quite good (they were OK, not great), I had faith that one bad work didn’t mean I was no good at this. I also toyed with lots of different media, and I drew inspiration from all kinds of places – books, poems, TV, other paintings, other painters, singers, album covers, computer games… nothing was off limits and nothing was an invalid inspiration source.

Attempting to be creative in bands was very different. There was either too much negativity, snuffing ideas out before they had a chance to grow, or else there was hardly any, resulting in time being invested in ideas that were definitely not worthwhile. For my part, most if not all my ideas were very plagiaristic. I suppose there were a few reasons for this. I was still lacking fluency in the playing of the guitar, and in getting the sounds from it that I wanted. I was looking to sources too close to me for inspiration. I was thinking about the “how”, but not about the “why”.

The more I was frustrated by the awfulness of what I was coming up with, the more it drove me to find out more about the musical artists I was trying to channel. I read their biographies, watched any documentaries I could find, and researched their collaborators. One man kept cropping up – Brian Eno.

I’m not going to give a rundown on the man’s biography here – instead I”m going to talk about one of the tools he has used since the ’70s – the Oblique Strategies. In the studio is a box containing 9cmx7cm cards. On each is written a phrase or cryptic remark which can be used to break a deadlock, dilemma or creative block. Here are some examples:

Work at a different speed.

Look closely at the most embarrassing details and amplify.

Honour thy error as a hidden intention.

I found them all listed on a website somewhere, and made up printable versions at work which I cut up and still have with me to this day. I still use them when writing/producing/mixing. With some imagination you can use them as jump-off points to take you in new and interesting directions, but I think the key thing is that they engage your imagination through text, getting you out of the music zone for a split second. I love that some are really vague, and some are very technical. Of course you can choose to interpret them in any way, that’s sort of the point. Get creative.

More from the Blog…